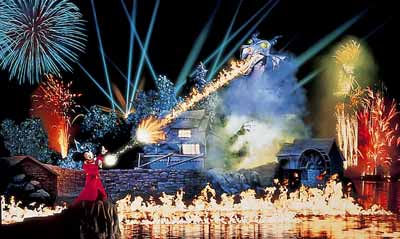 Welcome to the Disney War Record!Edit

Some folks at the website Tv Tropes (www.tvtropes.org) decided to create a grand, unifying cosmology and mythology for everything owned by the Walt Disney Company, which can be viewed at (http://tvtropes.org/pmwiki/pmwiki.php/WMG/FriendsAndTheHighCouncil). Here, we can go into more detail on and expand that information.

Note: Only stuff owned by the Disney Company is allowed, not stuff that merely played on a Disney channel or that Disney merely dubbed or distributed. If something is owned by Disney, it's allowed regardless of whether it has the Disney label on it or not (if it lacks that label, it enters the Megaverse). Please word info in your own words rather then copy info from TV tropes, and feel free to add additional info not on TV tropes. (See the link to the TV tropes theory page for other rules).

The universes of all stories told by Disney or one of its subsidiaries are all part of a huge multiverse, the core of a sprawling whole, leading into a yet bigger omniverse. The stories mostly chronicle a war that started at the dawn of time and has spread across the multiverse, a war between good and evil for the souls of everyone in every dimension. It is mostly a proxy war, though open battle has been known to happen as well. This is a record of that war, its players, and its cosmology.

This should go without question, but far left/far right satire such as Jesus Strikes Back: Judgement Day are also banned from this site.--Miru96 (talk) 22:38, July 16, 2020 (UTC)

Do Not I repeat DO NOT copy any real informations from any wikias or ESPECIALLY Wikipedia, Do Not add what movie or tv show they’re from, just be ORIGINAL. This is NOT the Disney wiki, the Heroes wiki, or the Villains wiki. Do not just copy and paste information from other Wiki sites and stick it here, that is completely pointless. This wiki is supposed to cover what happens in Disney War. If you are writing a biography for a character, please use the proper format (See articles like Chernabog, Belobog, Zeus, Mickey Mouse, and Maleficent for good examples).

Remember this is Disney War wiki, there are no categories of Disney Heroes, Disney Characters, Disney Sidekicks or Disney Villains, it would be completely pointless to make these categories.

Retrieved from "https://disneywar.fandom.com/wiki/Disney_War_Wiki?oldid=17538"
Community content is available under CC-BY-SA unless otherwise noted.